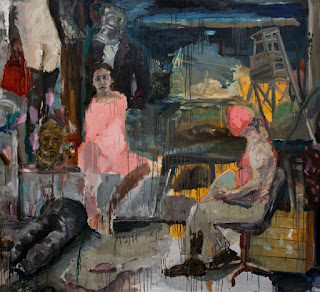 The paintings by Gerard Waskievitz seem to show scenes from everyday life. Situations everybody has witnessed, persons and their relations that seem strikingly familiar. Everybody has, in his life, stood before another person sitting in an easy chair, or encountered somebody frolicking at the beach. Still this is not quite correct in this case, and the more we look at his paintings, the deeper we delve into these images, the more we find that riddles are almost omnipresent, and that there are secrets behind every figure, and that the ultimate rationale behind this situation seems to be uncannily unfamiliar.
We know from forensics, philosophy, and other fields that nothing is what it seems. How could it be, then that it is any different in life in general? And, if it is not any different in life, it has to be the same also in art. Gerard Waskievitz explores the hidden dimensions governing the aristic world, caught between superficial reality and the necessary counterweight creation of a new, parallel world, which we are wont to perceive as art. This raises the question of the „how“, of the methods used in bringing forth this new world, this new visual experience. We gradually, step by step, with every little detail, begin to understand that it is Gerard Waskievitz’s brushwork in combination with his choice of colours that constitute the conditions for a completely new interpretation and innovative explanation of what we think characterises our lives. 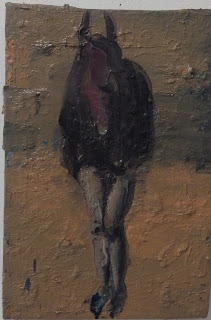 
This raises the existential questions of the why and wherefore – not only under the aspect of eternity but right under the aspect of the simple here and now: Why does the brush go this way here, and another way there? What does this depict, if it depicts anything at all? Are the contours of the object congruent with the contours of the discernible item on the canvas? Is the colour autonomous or dependent on preformed concepts? How far is the colour in its variations, its hues and layers, part of any object or part of the virtuosity of the painters brushwork?
It is indeed the brushwork itself which has all the answers we need. We do not look at the world, we look at a parallel world, a painted world, the world of art, with all its own laws and rules and regulations, processes and so forth. We cannot separate our visual experience from the recognition of what it is that we see. It is more than the commonly quoted „what you see is what you get“ – it is definitely „what you see is much more than you hoped for“. Explaining reality, explaining fantasy, explaining concepts and thoughts through the way they are presented, is, indeed, a very characteristic and revered aesthetic practice. 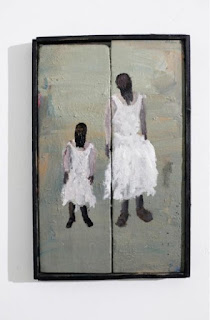 It is, in a way, like writing poetry, only that this time the fabric is not made of words, but of colours, of brush strokes, of traces of movement on the canvas, whose surface is altered by the application of colour. Of course painting is orientated towards the surface, being two-dimensional. The third dimension is only a kind of sham, a system devised to fool the eye. Conceptually, no painting is ever a 3D work. But what supports, enhances, and complements it, is the materialness of the colour, the qualities of the painted surface, which change from smooth to rough and from ragged to flowing, from the crumbly to the compact.These qualities are meant to interact with the beholder’s eye, slowing it down in its course, or accelerating it, contributing to an aesthetic dynamic, which also becomes an integral characteristic of the artwork. 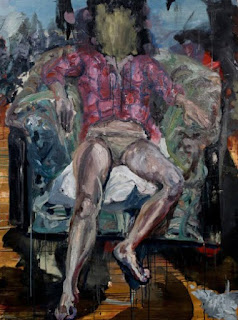 So looking at a work, a painting by Gerard Waskievitz, enriches our experience of the world, as it confronts us with the recognition of the way we see and perveive. And, lo and behold, we recognise that our ways of seeing images is in no way different from our ways of seeing the world.
In such a world of painterly aesthetics, what role does subject matter play? It runs parallel, with a lot of points and moments where the different systems touch and mutually explain each other. It is not that subject matter becomes aesthetics and the aesthetic is not the only subject matter, but they both are running parallel and form a kind of stereoscopic recognition of what’s going on. 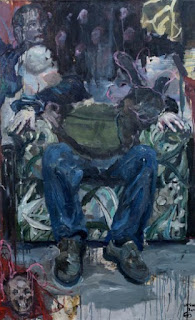 No matter whether an attitude is becoming form, or artistic form is generated by concocting seemingly contradictory statements of fact, of imagination, of poeticalness, a striking image always prevails in Gerard Waskievitz’s artistic production. We usually beam three different kinds of focus on anything we want to understand. It is the informational, the stylistic, and the aesthetic focus. The informational focus is dealing with the stories we are told, if we are told any story, which is not always the case, the stylistic focus deals with matters of style, which means that we look for characteristics distinguishing the work in question from others, like a poem from a news item in the paper, and lastly the aesthetic focus tells us everything we need to know about how something is made, thus providing a glimpse into the aesthetic cosmos and into the relations of the characteristics of production to any other system of lofty thoughts, like all kinds of historical, literary, and artistic references, quotations, and more of that kind. 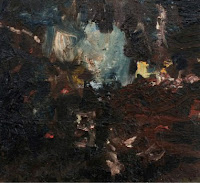 
So a certain kind of painting, a certain method of applying paint to canvas, can constitute a historical reference, an invocation of the emotional and social and aesthetic preferences of a painter or even a whole era, which in this case then this would constitute a kind of reconstruction.
Understanding what kind of reconstruction is going on, is a longish process of repeated and intensive dialogue with the work.
In the philosophies of Eastern Europe we often find an attitude that says that a clear thought is a small thought and that a clear thought is a thought that hasn’t been thought through to its very end. Of course this indicates the fact that the more you know about a subject, the more questions arise, and it also indicates the growing critical complexity of things in this world, whether we encounter them in real life, in analysing the universe, or, as a matter of fact, in art.
In Gerard Waskievitz’s paintings, we walk through a wonderland world, which shows us that there are many, many hidden dimentions. We take a stroll down memory lane, but we are also, every now and then, touching a kind of foreboding, a sudden vision of hell or paradise, alarm bells ringing telling about changes to come.
The paintings will thankfully indicate the paths to follow in order to arrive at understanding main station, at recognition, but things don’t come easy. Why should they? It’s not written in any book. And this contributes to the fascination of Gerard Waskievitz’s art.